FROM AN acquaintance with the manual alphabets which are contained in this book [see pages 83, 84] much amusement and instruction may be derived. Their use, by hearing and speaking children, directs attention to the written form of words and greatly aids them in forming the habit of spelling correctly, which is of so much importance to them in after life.

Deaf-mutes, for whose benefit these alphabets were at first invented, frequently misplace words, and construct their written sentences in a very ungrammatical manner—their knowledge of the English language (confessedly one of the hardest to learn) being more or less limited by their misfortune and other circumstances—but they seldom misspell a word. This fact alone is ample proof that the use of the manual alphabet, by which, in the main, instruction is imparted to them, is a great help to correct spelling.

The use of the manual alphabet requires that each word used should be spelled out; and it will readily be seen that practising it is, in reality, practising spelling, and that those using it must necessarily become proportionately correct in that important branch of education. It is capable of many uses, and will be found, when acquired, as is easily done by any person of ordinary intelligence, to be one of the most convenient things, at certain times and in many places, that exist.

In this connection, a brief history of manual alphabets may not come amiss. We quote from a late writer on the subject—

The manual alphabet is by no means a modern invention. There were manual alphabets used in very early times, as early at least as the time of Solon, the Grecian law-giver, who flourished about 500 B.C.

Dr. Peet, of New York, supposes that when Solomon speaks of those persons who “speak with the feet and teach with the fingers” (Proverbs vi, 13), he alludes to some mode of furtive communication on forbidden subjects, resembling the early manual alphabets, used by children in schools to exchange words without being detected by the master.

The earliest alphabets we know of were founded on the ancient signs for numbers. The Greeks and Romans, at a very early day, had a regular and ingenious system of notation by means of positions of the hands and fingers.

Pliny speaks of an ancient statue of Janus, at Rome, the hands of which were sculptured in the positions representing the number 355, which was the number of days in the lunar year of Numa.

The Greeks and other Eastern nations used all the letters of their alphabet for the notation of numbers. Hence, as every letter denoted some number—A for 1, B for 2, etc.—it was very easy to reverse this, and make each sign for a number denote a letter.

The Romans had an alphabet, used for communications which those making them did not wish to be known to the by-standers, in which each letter was denoted by touching some part of the face or body, the name of which began with that letter, e.g., aurem (ear), barba (beard), caput (head), dentes (teeth), etc. These alphabets seem to have been generally known, at least to the learned and curious, from very early times, and it is remarkable that, so far as we know, no one ever thought of using them for the instruction of the deaf and dumb till the time of Ponce and Bonet, the early Spanish teachers, the former of whom died in 1584. 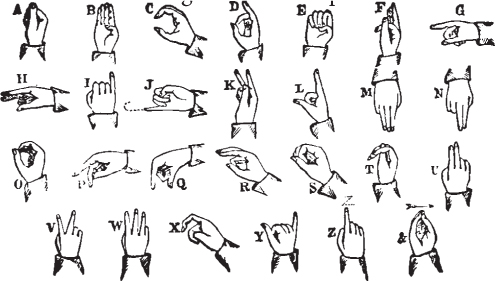 The manual alphabet which is now used in French and American schools (the one-handed) was brought from Spain to France, and from thence it reached America through Dr. Gallaudet and Laurent Clerc, portraits and sketches of whom will be found elsewhere.

The two-handed alphabet has been used in England for centuries, but the one-handed alphabet, owing to its obvious advantages, is gradually making its way there, although the former has the advantage of being very generally known in society.

Of the two alphabets, the one-handed is certainly the most graceful and convenient. In a multitude of cases, we may have one hand engaged, and of course it will be hardly possible to spell intelligibly, if at all, with both hands, for instance, in riding, or holding an umbrella, or in reading from a book or letter in one hand.

Yet the two-handed alphabet has some advantages. Its characters, bearing more obvious resemblance to the forms of letters, are more easily learned, and they are visible at a greater distance and with less light. Experience seems to prove, also, that it is less fatiguing to the muscles. 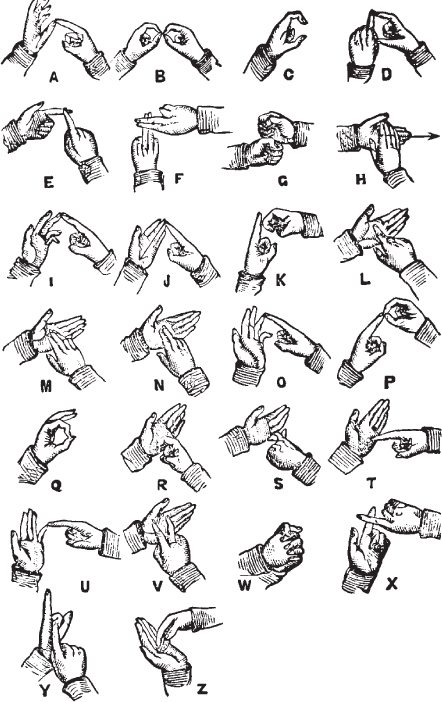 Either alphabet can be used in the dark, after a little practice. In the dark, the sense of feeling comes into play, as the one who is spoken to must feel of the speaker’s hand or hands, thereby discerning, by the position of the fingers, what letters are made.

In point of rapidity, actual trial and numerous experiments have failed to place the advantage, definitely, on either side; but the impression is that the two-handed alphabet, presenting, as it were, letters in larger type, can be read faster than the other by one equally practiced with both.

A deaf-mute of nimble fingers and quick perception will spell out the Lord’s Prayer by either alphabet in about half a minute, omitting no letter. Some can do it in less, but not so as to be legible to average eyes. This is from three to four times as fast as an expert penman can write the same prayer so as to be legible, though probably three or four times as slow as it can be read orally, by one expert in oral reading.

Neither alphabet will, except in very rare cases, where flexibility of finger and quickness of visual perception are extraordinary, enable a practised speller to communicate a speech, prayer, sermon, etc., word for word, to another, although the substance can readily be given: and the attention of many interested minds has long been directed to the discovery of some substitute by which this can be done. Several plans have been proposed, but none seem as yet to meet the case, some because they are too complicated, and others from their evident inconvenience; but, in this age of progress and invention, it is perfectly reasonable to suppose that a substitute will hereafter be devised which shall meet all reasonable requirements.

The true way to educate children is to combine instruction and amusement or interest. The manual alphabet is just such a combination.