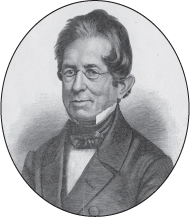 THIS GOOD MAN, whom every deaf-mute regards as a benefactor in no small degree, and whose name and memory are cherished by that unfortunate class all over the country, was born in Philadelphia, Pa., Dec. 10, 1787. His family early removed to Hartford, Conn., which city was ever after the residence of the son.

His attention was early called to the existence of a neglected and unfortunate class of people called deaf and dumb; his warmest sympathies were enlisted in their behalf, and he sailed for Europe in 1815 to qualify himself as a teacher of the deaf and dumb.

He made the acquaintance of the Abbé Sicard—one of the greatest benefactors of deaf-mutes—in London, and went to Paris with him and obtained a knowledge of the system there employed. Returning to America, he brought with him Laurent Clerc, a highly educated deaf-mute, of whom more is said elsewhere, and established the American Asylum for the Deaf and Dumb at Hartford. He was its principal until 1830, and then resigned, but always evinced a lively interest in its welfare to his death.

In 1850 the deaf-mutes of the country united in presenting Dr. Gallaudet and Mr. Clerc with a magnificent service of silver plate as a testimonial of appreciation; and in September of the ensuing year multitudes of the unfortunate, besides the deaf and dumb, were pained beyond expression to hear that their loved benefactor had passed away from earth.

In 1854 the deaf-mutes of the United States erected a handsome marble shaft to his memory, on the lawn in front of the American Asylum; but his most enduring monument is in the hearts of those whom he benefited during his life.

Dr. Gallaudet was, during the latter years of his life, intimately connected with the care of the insane, and his labors in that sphere were both enthusiastic and effective. The following lines, written for his funeral service, most clearly exemplify the character of the man.

When such as he ascend to heaven,

For where Death strikes a shining mark

Through bleeding hearts his shaft is driven.

Alike the sounds of mourning come

From humble hut and lofty hall, —

Wherever misery finds a home;

And all lament the friend of all.

He dies; and still around his grave

The silent sons of sorrow bend,

With tears for him they could not save, —

Their guide, their father, and their friend;

And minds in ruin ask for him,

With wondering woe that he is gone;

And cheeks are pale and eyes are dim

Among the outcast and forlorn.

He lives, — for virtue cannot die:

The man departs, his deeds remain;

They wipe the tear, they check the sigh,

They hush the sob of mortal pain.

The holy flame renews its glow,

While man’s brief years of pilgrimage

End in the dust of death below.

SUCCESS in life is very apt to make us forget the time when we “wasn’t much.” It is just so with a frog on the jump: he can’t remember when he was a tad-pole, but other folks can.

THE number of deaf-mutes in our population is increasing, and an acquaintance with the manual alphabet will enable others to converse with them without the trouble of writing.

“It is an entertainment and a novelty to children to find that they can produce language in a new form.”

GOOD DEFINITIONS. Jean Massieu, a French deaf-mute, contemporary with Laurent Clerc, and, like the latter, a teacher in the Paris Institution, once gave the following definitions:

Sense is an idea-carrier; hearing is the auricular sight; gratitude is the memory of the heart; hope is the blossom of happiness; and eternity is a day without yesterday or tomorrow.

PUNCTUATION. This great and important auxiliary to correct writing is much ignored and little understood. One needs a system to go by. Perhaps the following rules, by an “ancient printer,” may be of assistance to some. They are admirable for simplicity, to say the least.

“I set up (type) as long as I can hold my breath, then put in a comma; when I gape, I insert a semi-colon; when I sneeze, I put in a colon; and when I want to take another chew of tobacco, I insert a period.”